A Busy Bee: multifunctional IL-2 in the immune system and the immunotherapy

We always hear about the Interleukin-2 (IL-2) while culturing the cells, including T cells, natural killer cells, and the cells of monocyte lineage.
And why is the IL-2 so popular? Let’s figure it out.

What’s the IL-2?
In the immune system, IL-2 is a T cell-derived cytokine and a cytokine signaling molecule. IL-2 is involved in the body's natural reaction to microbial infection as well as the distinction between "non-self" and "self." By interacting with IL-2 receptors, which are present on the surface of lymphocytes, IL-2 can exert its effects. Activated CD4+ T cells and activated CD8+ T cells are the primary sources of IL-2[1] but have been reportedly made by NK cells[2] and dendritic cells[3, 4] as well. 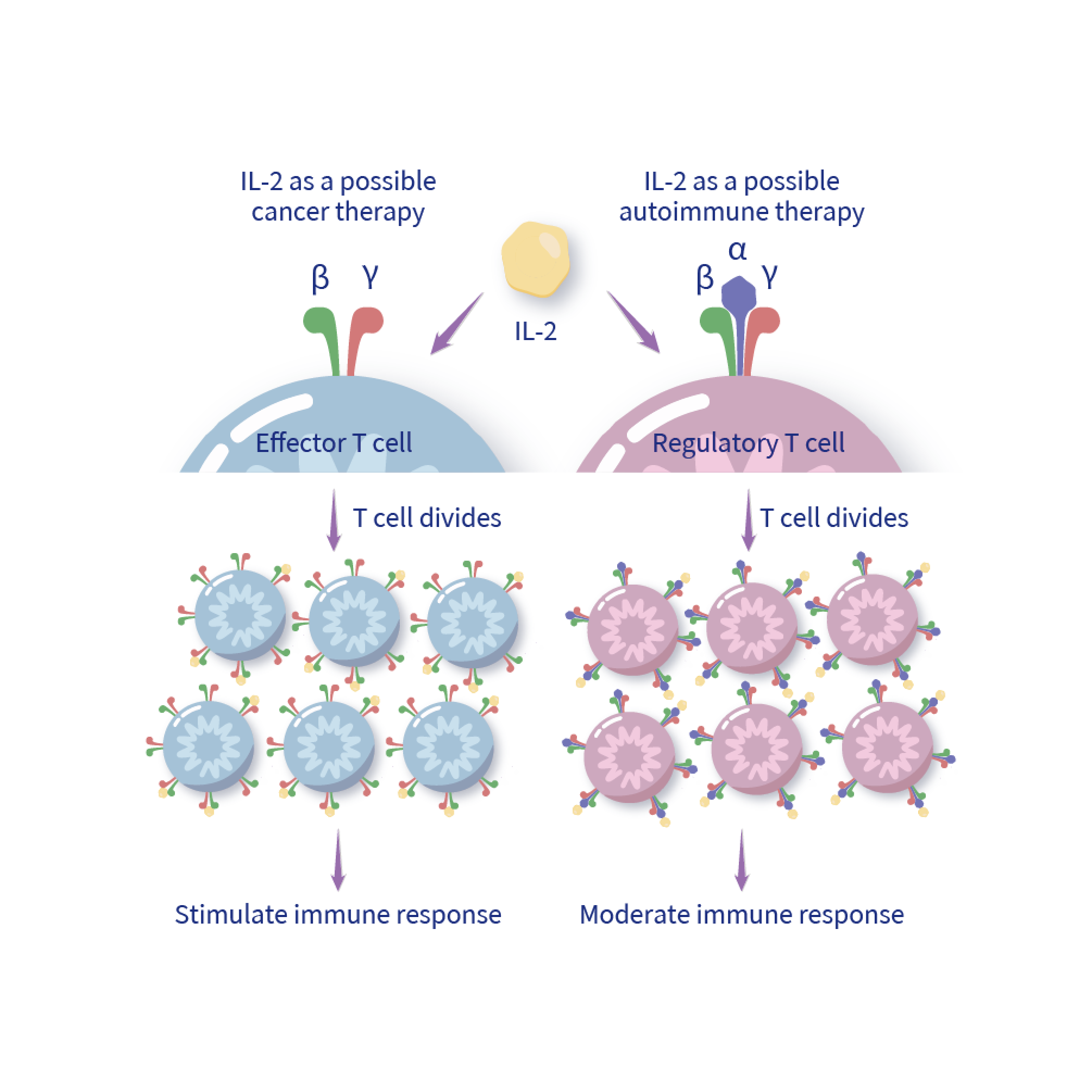 What’s the ability of IL-2?
The immune response is influenced by IL-2 in a pleiotropic way[5]. Its secretion is closely regulated and plays a role in immunological responses as part of both temporary positive and negative feedback loops.​


How do IL-2 transmit the signals?
IL-2 signals with cells via heterotrimeric cell surface receptors, which are expressed by a variety of cells, such as lymphocytes. IL-2Rα (CD25), IL-2Rβ (CD122), and common γc (CD132) are the three subunits that form the IL-2 receptor. These subunits could assemble in various combinations, each with a different affinity, high, medium, and low. [8] Once IL-2 attaches to the IL-2 receptor, there would be three different signaling transduction that happened, AK-STAT, MAPK/ERK, and PI3K/Akt/mTOR.

How do biopharma and biotech companies apply IL-2 in immunotherapy now and in the future?

♦ Adoptive cellular therapy (ACT)
​IL-2 immunotherapy was reported in a number of clinical trials because of its capacity of expanding and activate a variety of cells. The most well-known one is to massively expand T cells, like tumor infiltrating cells (TIL) and TCR/CAR engineered T cells. For more than 20 years, ACT T cell cultures have been established and expanded using high doses of IL-2. [9] Meantime, T cells are forced to express IL-2 themselves which would prolong survival and sustain tumor specificity function as well.
IL-2 can also facilitate the differentiation of T cells which may lead to generating various types of T cells, such as regulatory T cells (Treg). Currently, Treg cells are being explored as a potential treatment for autoimmune diseases and graft rejection.[10] However, the research showed that Treg cells are not suitably maintained under inflammatory conditions as their pro-inflammatory characteristics would augment the autoimmune response. So, researchers prefer to do the in vivo Treg cell-based therapy via a low dose of IL-2 induced Treg than ACT.
In the recent studies, there is a subset of unconventional T cells, Vγ9Vδ2 T cells (γδT cells), have gained lots of attention as an intriguing tool for immunotherapy by ACT. γδT cells can display a strong anti-tumor activity. Most of the studies conducted γδT cells expansion only use IL-2 which is important to the effector of the γδT cells.[11]
In addition to CD8+ T cells with cytotoxic activity, NK cells also play an important role against cancer cells. It has been shown that T cell-derived IL-2 can activate NK cells in vitro. Although the development of NK cells is no need for IL-2 stimulation, it is essential for the effector function of the NK cells.[12]

♦ IL-2 Administration
As we mentioned above, IL-2 is a crucial cytokine when doing the ACT. In fact, in 1992, the first IL-2 treatment was approved by the FDA. The administration of IL-2 and the adoptive transfer of anticancer T lymphocytes cultured in high dose IL-2 are successfully in curing meta-static renal cell carcinoma and melanoma.[9] 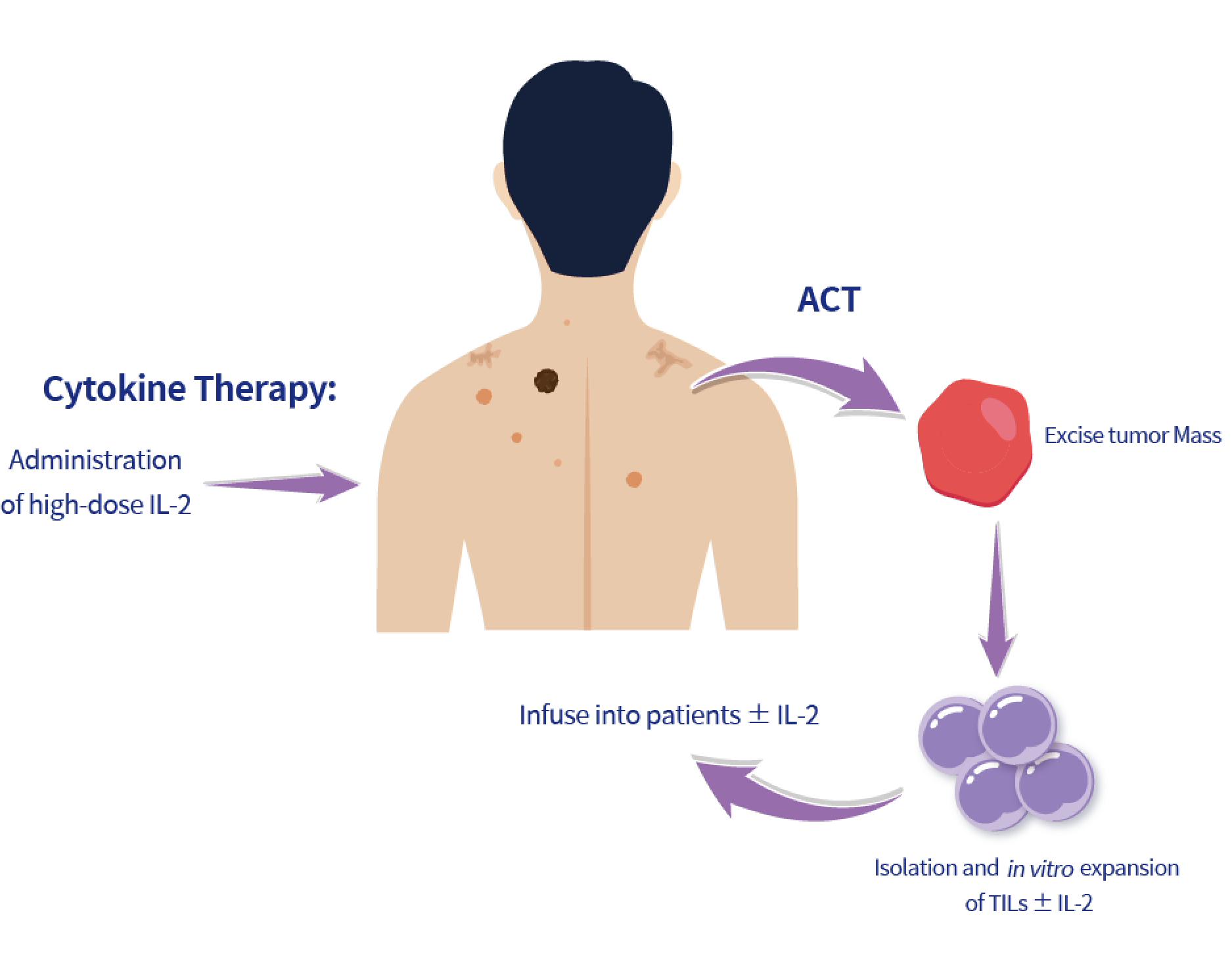 However, the high dose of IL-2 requirement would lead to toxicity and serious side effects for the patients, such as inflammation and vascular leak syndrome. [13] Also, the short half-life of IL-2 could be the limitation of widely used in cancer therapy. In the past three decades, the researchers are dedicated to modifying the IL-2 signal transduction via engineering methods, pharmacokinetics properties….and so on. [14] Researchers recently fuse low-affinity IL-2 (laIL-2) with an anti–PD-1 antibody (PD-1–laIL-2) to target intratumoral T cells. LaIL-2 shows decreased binding to IL-2Rα and IL-2 Rβ, which would reduce unfavorable binding in the tumor and peripheral. On the other hand, tumor-infiltrating CD8+ T cells express high levels of PD-1. Respectively, PD-1–laIL-2 was more interested in intratumoral CD8+ T cells than Treg cells or peripheral CD4+ and CD8+ T cells. Even though the fact that this research is still in the animal model stage, these encouraging findings imply that PD-1–laIL-2 treatment could benefit cancer patients. [15, 16] 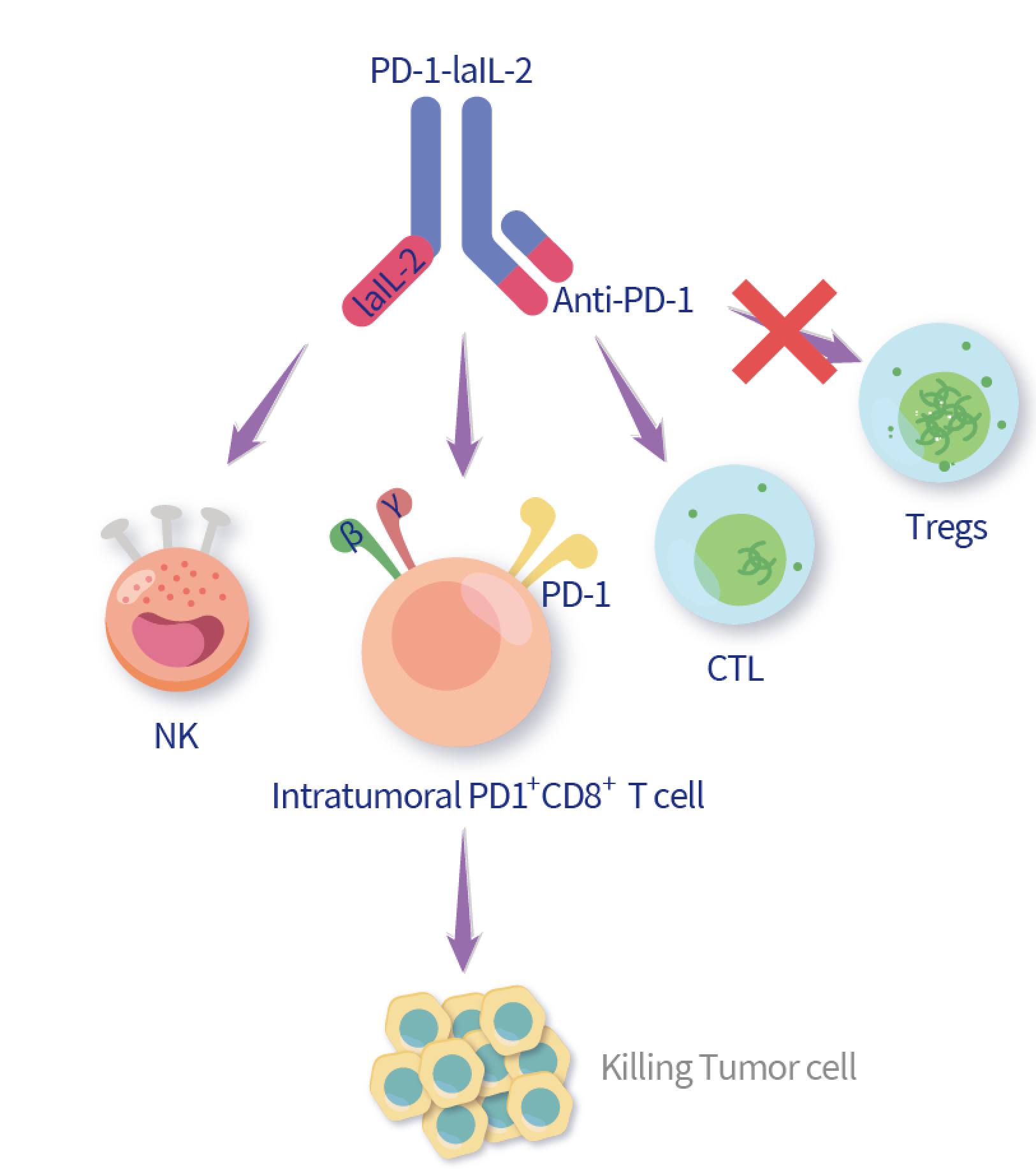